It is May 7, 2015 and I am on an early morning train bound for Milan, on my way to a rather special book launch and to have a look at EXPO, the Universal Exposition running with the theme ‘Feeding the Planet; Energy for Life’.  I go with a pinch of skepticism and a handful of hope;  I think the theme is a worthy one and I know that the smaller operators and contributors like Slow Food will be talking concretely about the ways in which we can feed the planet sustainably, but I also know which multinationals with their poor farming practices and market led nutritional values are behind the event.    On the positive side I do believe that as the host Italy has a lot to offer; as a country – or more a collection of regions – where agricultural and gastronomic traditions still manage (just) to prevail over the power of the food and beverage super powers.

Outside the train the spring sun smiles on the rolling vineyards around Chiusi as the train hums north.  It is 2015, and I have lived in this country; this inspiring, provocative, tempestuous, bemusing country for ten years.  I came to learn from the Italians and if I had to roll that learning into a tight nutshell it would be this: I have learnt that culinary traditions are not whims or fancies or passing trends, but socio-cultural phenomena tied to the land and its people.  And if sustainability is our goal, looking at these local traditions, those rooted in what the land can offer us, is key. As a way of marking my ten years, this will be the first of ten posts sharing something of what I have learnt from the Italians and their immense food culture.  It’s a bit hard to divide what I have learnt into distinct groups or separate recipes, because the same principles like seasonality and root to sprout preparations keep popping up everywhere.

Italy has always been a multicultural nation, and the food of each of the peninsula’s twenty one regions and autonomous provinces is the proof.  When huge groups of southern Italians migrated to the great industrial North in the 50’s and 60’s they were as ‘foreign’ to the local populations as a North African arriving for a factory job is today, a fact often overlooked by the ugly words and base t-shirts of a certain brand of Italian politician.  Sicilian food has more in common with the food of Tunisia and Morocco than the beef and dairy rich menus of Piedmonte or Lombardia, and the North of the 1960’s was surely enlivened by the appearance of southern trattorias heady with peperonico, capers and the tang of citrus.

Gastronomic multiculturalism is such fascinating territory because as Slow Food and other biodiversity movements rightly encourage us to eat local produce tied to the territory, reminding us that protecting traditional vegetables and legumes can improve nutritional and environmental outcomes, the exchange of culinary traditions – and by this I mean our interest in learning about food from other countries or regions – is the table at which we can all sit to become closer as human beings.

Italians are generally very culturally aware of the links between a particular recipe and its regional origins.  Orecchiette pasta is from Puglia, and everyone knows that it is best served with Broccoli or Cima di Rapa, preferably on a very Pugliese terra-cotta plate. 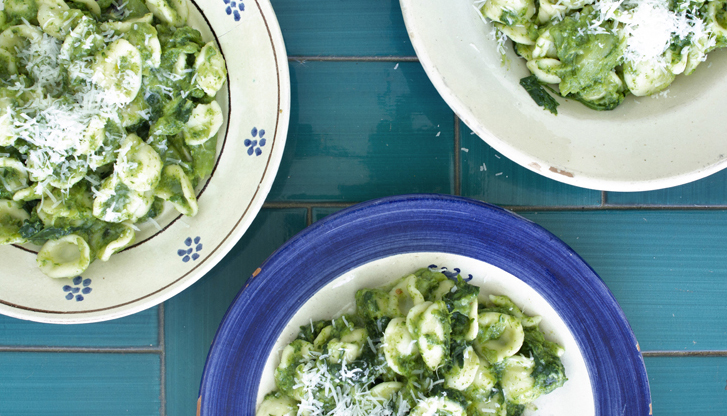 I have only been to Puglia a couple of times and my last trip was maybe seven or eight years ago to the wild country south of Bari; where parched looking olive groves and rocky beaches dive into the sea and the summer light dazzles against the white of the southern baroque piazzas. We followed my friend Elisabetta’s old Fiat Panda down past Naples and across the highway that links the Tyrennian Sea on the west to the Adriatic on the east, arriving near Oltranto as the sun came up over the coast that looks over the sea towards Albania and Greece.  Someone found coffee and we all shook off the grogginess of the night drive by pitching ourselves into the salty turquoise water.

As sure as the sea is untamed and the many of the beaches rocky and inhospitable, the food in Puglia is wonderful.  Mention that you have been to Puglia, and people will immediately coo “ahhh, si mangia bene in Puglia, si mangia benissimo”.  Never mind that the same people will say the same thing if you happen to mention you have been in Basilicata, or Emiglia Romagna or Le Marche or Piedmote.  It’s all true, you do eat well in each one of the twenty one mini countries that make up Italy.

Broccoli; which includes broccolo romananesco; a fluorescent green variety with lord of the flies looking pointy florets, along with Sicilian or regular broccoli and Cime di Rapa; which are literally turnip tops which have little broccoli like sproutings amongst them, are strictly winter vegetables in Italy.  Any variety can be used as a base for Pasta con Broccoli or Pasta con Cime di Rapa.  In Puglia, the green sauce that results from the cooking down of these winter greens, perhaps with a couple of anchovies, a dried chili or two, is served with small ear like pasta called Orecchiette, and the broccoli have been well cooked enough to form a generous sauce for the little ears.  Some recipes cook the broccoli and the pasta at the same time, others cook the broccoli first but conserve the cooking water in which to cook the pasta.  I warm to both ways because they are practical, save water and call for less washing up, even though I favour the latter. 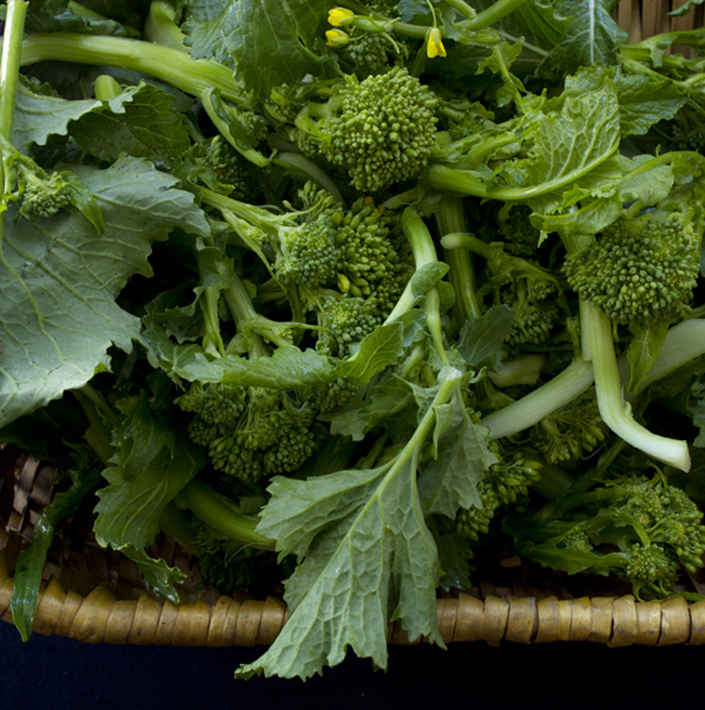 Bring a large pot of water to the boil.  Rinse the broccoli and cut into manageable florets.  Root to sprouts is an Italian mantra; the finer stalks get cut into manageable pieces and the larger trunk of broccoli peeled to reveal the tender core, diced and in they all go. Once water has come to the boil toss a good heaped teaspoon of salt in along with the broccoli and cook until al dente.

Remove the broccoli using a small colander or slotted spoon and keep the lovely green cooking water for the pasta. In a good large but light, preferably round sided frypan (aluminium pans are best), heat 4 tablespoons of extra virgin olive oil over a medium heat.  Add the whole clove of garlic, a small dried chili broken in pieces and the anchovies.  Use a wooden spoon to bash the anchovies into a kind of paste.  Add the cooked broccoli to the pan and stir well, adding a tablespoon or so of cooking water to the pan.

The cooking water, the secret to Italian pasta sauces.  I have seen recipes for Pasta with Broccoli in so many foreign publications where the broccoli is bobbing around (almost raw) on top of the pasta, a kind of travesty.  Italians cook the cima di rapa or broccoli down (using the cooking water) to create a sauce;  letting the vegetables become a velvety coating for the pasta, enveloping the little ears or orecchiette with the flavors of the broccoli perked up by the chili and the saltiness of the anchovies.

Once the broccoli sauce is simmering away add the pasta to the green cooking water that has been brought to the boil add a teaspoon of salt and cook according to specified cooking times.  I like to think that some of the minerals lost in the broccoli cooking process find their way back into the pasta during this stage.  Keep adding the cooking water to the broccoli sauce, which at this point has the advantage of being starch enriched thanks to the pasta, which will help thicken up the sauce.

Rather than draining the pasta once it is cooked, I prefer to fish the pasta out of the pot with a small strainer or large perforated ‘spider’ spoon, (the kind used for frying) and add to the waiting sauce.   and toss well.

Take to the table in a large ceramic pasta bowl, drizzled with a little extra virgin olive oil.  In Puglia the traditional terra-cotta table ware is marked with simple brown rims and a blue dot like flower pattern.  If you have left out the anchovies you can dust the pasta with a little Pecorino Romano. 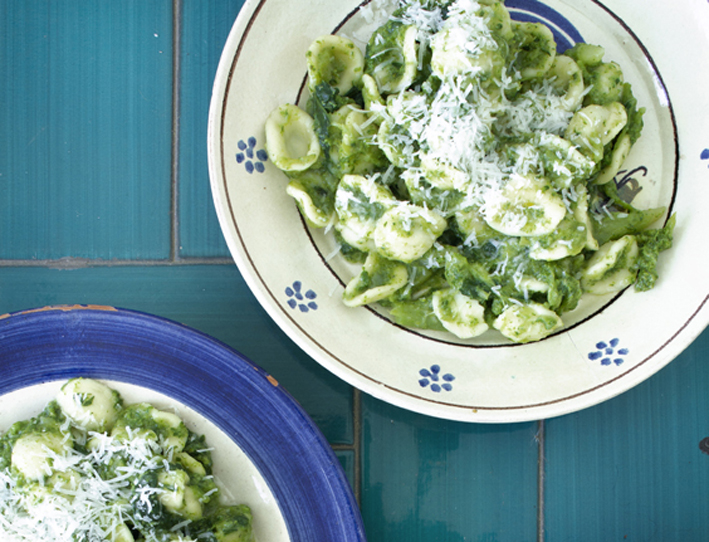 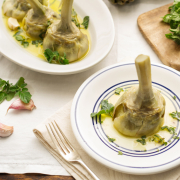 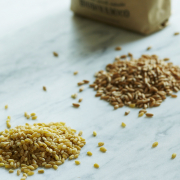 ancient grains for every season 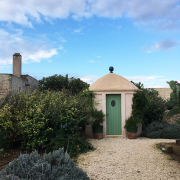 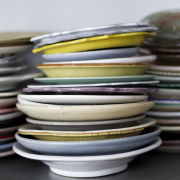 low tech Italian classics to stuff into your suitcase 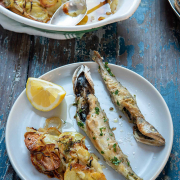