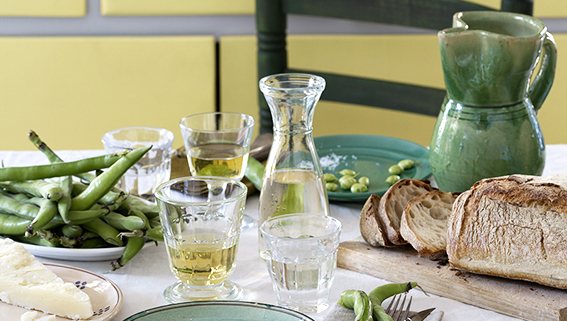 The Italy that I love, that I inhabit, that I feel content to be bringing my children up in, is what I call everyman’s Italy.  It is above all an accessible Italy, where the best things in life are free (or at least cheap); a world made up of rambling public parks and bustling markets, of boisterous small town festivals and homely trattorie.  A world far away from the sumptuous villas, private islands and infinity pools of the glossy lifestyle pieces that pepper international magazines.

Everyman’s Italy is where traditions come form ordinary families, where the best food has limited ingredients and where flavors don’t compete with each other because they don’t have to.  In everyman’s Italy food at festivals and sagre in the country gets dished up on endless plastic plates that go on to fill endless bursting plastic bags of waste that will fill endless bursting landfill depots. This is an aspect of everyman’s Italy that I love less, that worries me, that makes me dream of a future where festivals will ask people will bring their own plates (there are a handful that do), or where the ticket price will include a simple terra-cotta plate like in times past.  This is where my own environmental/aesthetic vision of things of things gets morphed into something like the photos below, where traditional plates and rustic water jugs found at countless mercatini fill the scene.  Some people view this as repetitive styling fluff, I like to think of it as valuing tradition, but I am diverging. 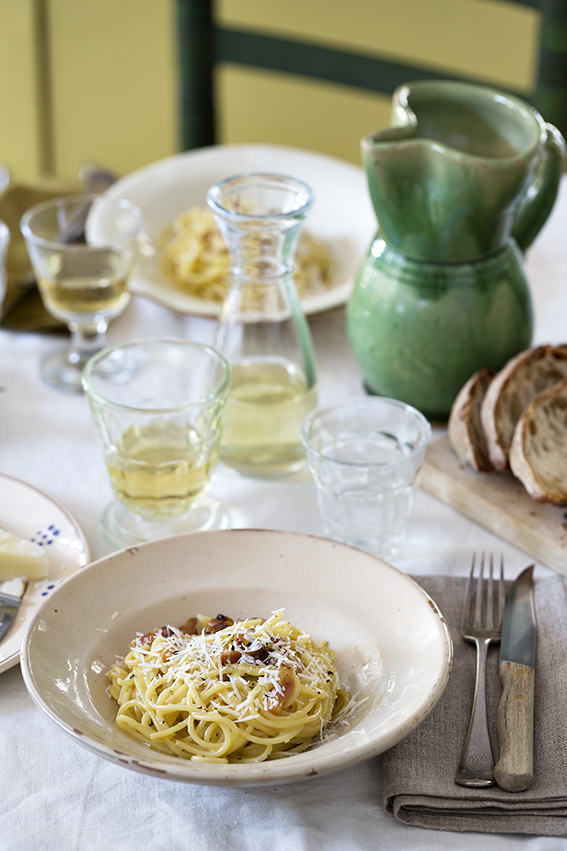 There are just four ingredients in the most Roman of Roman pasta that is la carbonara. Eggs, cured pork, pecorino romano and pasta, punto (full stop). The simplest of fare, rounding up pretty much the same elements (carbohydrate and protein with a good dash of animal fat) as an English cooked breakfast, and for much the same reasons (to keep the workers going).  La Carbonara is loved for its creamy (even though there is no cream in it) fatty comfortableness. The cheese is pecorino because Lazio is sheep territory and pecorino romano is the aged cheese of the region. The pork fat is guanciale (cured pork cheek) because Romans cook and cure every part of the beast possible, and the extra fat is what nudges the eggs over into their cooked but not scrambled state, which along with the cheese gives the pasta its silky, yolky coating.

I never really set out to write about Roman food per se in this blog, there are enough great writers out there doing that.  But so much of what I cook regularly is Roman, and in choosing a recipe that captures the essence of unsophisticated food, it’s hard to look past the city’s classics.  Rome being as it was for centuries (under Papal control) a rather isolated place, the city’s food lacks the external influences (Spanish, French, Austrian, Arab) that make the regional traditions of say Sicily, or Piedmonte or the Veneto so interesting.  But while a carbonara may be simple, there is a certain art to its preparation.  Traditionally handled by Leonardo in our family – it is the quick combination of the just cooked pasta, the boiling hot fat of the guanciale and beaten eggs – that create the dish.  Essential is a stainless or glass bowl large enough to comfortably mix the all of the ingredients in, and I find that fishing the pasta out of the cooking water with a pasta spoon and into a waiting colander, rather than draining the pasta all together works well. 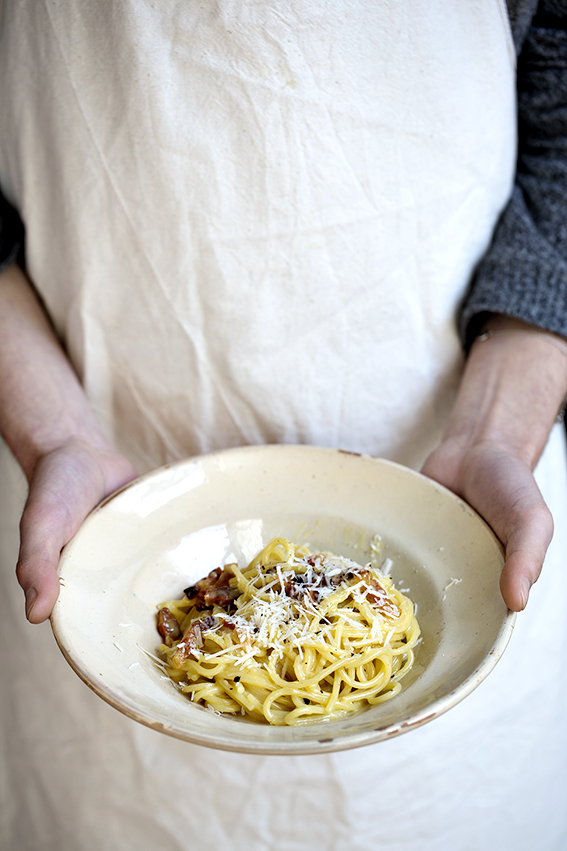 The trick to la carbonara is to just cook the egg – not in the pan but by way of the heat transferred from the park fat and the just cooked pasta. Timing is everything. Practice is ongoing.

In a large mixing bowl beat the eggs, half of the grated pecorino and the pepper. This bowl will be where all elements of the pasta come together, keep it in a warm place.

Bring a large pot of water to the boil, using the ratio of about 1 litre of water per person. Add a teaspoon of salt to the pasta water as it comes to the boil. While the pasta is cooking fry off guanciale or pancetta in a tablespoon of oil. It needs to be fatty, so if it is too lean add another tablespoon of oil.  (Perhaps the perfect carbonara is a mix of fattier guanciale and meatier pancetta.)

As soon as the pasta is cooked ‘al dente’ fish it out with a large pasta spoon and into a waiting colander resting in another bowl.  Add straight away to the large bowl with egg and cheese mix, along with the hot guanciale and rendered fat. Mix everything vigorously, add the remaining pecorino and serve.