What I have learnt from the Italians

Not all oils are created equal

I started writing this post from Beirut, part of a recent roll of finding time to put words together only whilst on planes, trains or in hotel rooms.  I was back in the Lebanese capital on another baba ghanoush junket; that is working on a TV commercial for a nutritionally dubious food product for the Saudi market.

On set 22 year old Antoni gave me a hand in the kitchen and among other things we talked about the Iran deal, his upcoming trip to America to visit his Aunt, and his home village in the Mount Lebanon ranges.  The organic eggs we had bought came from his village, he pointed out, and I asked him about what else they made up in the mountains and their valleys.  Cheeses and yoghurt yes, he said, and olives, and oil of course, their own olive oil.  I thought about how I would like to go and visit the fertile valleys of this ancient land, and about how nothing is quite as good your own olive oil, especially when it is just pressed.

Last year was such a bad year for olives in Italy.  The weather was all wrong; the winter too warm, the spring too wet and it never got quite hot enough in the summer.  A terrible fruit fly that flourished in the aforementioned climatic conditions hit olive groves hard all over central and southern Italy; harvests were down as much as 90% and the quality was poor.  Everyone is hoping that 2015 will be a (much) better year.  If it is we will buy twenty litres from our Lubriano neighbors.

The olives are shaken from the trees with not unsubstantial fatigue by the farmers in the Tuscia area in late October early November.  The turning of the seasons gives a nip to the air and the ground is softer underfoot.  Writing about it now, in the heat of this scorching summer, makes me nostalgic for the smell of autumn, for the smoky mulchy-ness of the air and the different kind of silence that comes over the little town.  After the harvest has been cold pressed at one of the local frantoio or comunal presses, everyone celebrates by grilling slices of bread, drizzling them with thick green victiously fresh extra virgin and washing everything down with a glass of local wine.  The premise is that when the oil is this fresh, you want to hear all of it sing.  No need to bog it down with too many flavours, let the simple unsalted bread host the beauty of the extra virgin.

Respect is the word that springs to mind when I think about the pomp accorded to these dates in the year.  Like the rites of the harvest festival in the middle ages; respect for the seasons, for the earth’s bounty, for local traditions, is still a big part of rural life.  Olive oil is the god of the Italian table – and so much revolves around it. Extra vergine is the first pressed oil, the best that the thousands of olives can squeeze out.  Just virgine or simply olio d’oliva are the successive presses – of a lower quality mainly due to higher acidity, rougher taste and fewer digestive benefits.

Italian cooks tend to choose extra virgin for everything, but even amongst extra virgins not all oils are created equal.  Because each region has its own climatic conditions the olive oil from Liguria is for example more delicate that the gutsier oil of Puglia.  Less expensive extra virgin maybe 100% Italian but made with olives from various regions.  Higher quality, and more expensive oils use olives from just one area.

So there is the olive oil to cook with – which is important, and the olive oil that is used after the cooking – which is even more important because you can really taste it.  In cooking some of the flavour of an oil will be cooked out, but crudo is the oil for dressing, drizzling and swirling.  Many fine pasta sauces should be dressed with a ‘filo d’olio‘ literally a string of oil, likewise a ball of mozzarella di bufala.  A just cooked steak or even a fried egg is lovely with a light drizzle.

And so I come to the part about learning from these wise Italians.  To prepare a zucchini, or an eggplant, things I do quite regularly over the summer, especially when my neighbors hand fat zucchini over the fence, I’ve learnt (from Leonardo and many others) to dry grill, saving the oil for the dressing of the grilled vegetables.  Eggplants particularly, are like sponges and when I used to brush them with oil it just soaked into the eggplant only to burn on the grill.  To grill without oil the BBQ or grill needs to be at a medium temperature, the vegetables sliced, sweated (in the case of eggplant), and lightly salted.  They should cook gently, and can be turned often.  It is after the grilling that the best quality local* extra virgin olive oil is added, along with aromatic herbs and perhaps a little garlic or chili.

Cut the vegetables.  I think ‘sweating’ the eggplant is worthwhile (but there are those who skip it), and do so by slicing, salting each side and laying between absorbent paper or a clean tea towel for a good 15 minutes.  Wipe the salty water from the sliced eggplant using the paper or tea towel, most of the salt will come off with the water, and what remains is the seasoning.

Place the zucchini in a bowl, and toss in a pinch of salt.  The texture of zucchini is much firmer than eggplant, so they can take just a tiny drizzle of oil if you like.

Heat BBQ or griddle plate to a low to medium heat.  Place sliced vegetables on the grill and turn regularly till they have softened.  If they char, turn down the heat.

How to dress grilled vegetables depends on how much you love garlic and/or chili, and what fresh herbs you have handy.  I like a mix, say parsley and oregano, but mint is wonderful too.  Very finely chop (or mince) a clove of garlic and roughly chop the fresh herbs, mix with a very generous pour of olive oil and a dash of vinegar or lemon juice.  If you have time to let the vegetables marinate a little before they are served – all the better.

* Every country around the Mediterranean (and those with climates akin to) produces olive oil.  Some olive oils are a deep golden yellow and others the brightest green.  Some are round and almondy, others peppery and punchy.  Every country, and the regions within it, believe their own oil to be the best, and if we follow the idea of terroir or territorio then a local olive oil is always the best for the regional specialties of that area.  Local is best for this reason, and because it cuts down on food miles, which we all like. Far from the mediterranean Australia has become a top notch olive oil producing country, buy local, there is no reason not to. 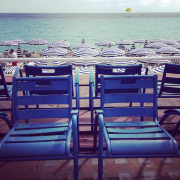 a jar of jam & a basket of beans: niçoise salad
5 replies