From the series Ten Years – What I’ve learnt from the Italians.

* The above photo is a reproduction of a newspaper print of an Assemblage piece by Rumanian-Swiss artist Daniel Spoerri who is an exponent of the Eat Art movement.

In most Roman cake shops there are lovable little biscuits made of almonds and hazelnuts that go by the name of Brutti ma Buoni which simply translates as ugly but good.  In a way they sort of sum up Roman food; the stews, the thick soups, the braised vegetables; food that is a symphony of flavors without being beautiful to look at in a what we imagine to be beautiful kind of sense.

I came to Rome from millennium-era-multicultural-vibrant-creative-on a roll Australia.  I had worked in restaurant and catering kitchens back in the nineties where expertise was paramount but always alongside fabulous presentation.  It was a period in which the Australian food scene had exploded.  Incredible chefs like Dan Hunter and Ben Shewry gained international recognition and a host of brilliant photographers and talented cook/stylists took the modern Australian look ‘fresh, easy, gorgeous’ to a worldwide audience.  Genius architects like Six Degrees; who led the way in using recycled, or up-cycled materials in their restaurant fit outs, were creating new exciting spaces, the centre of Melbourne was revitalizing itself as bespoke bars and cafés were squeezed into lane ways and abandoned warehouses.  Everyone was doing great fit outs, everyone had cool chairs, interesting cutlery and Reidel glasses. Alongside the interiors the food standard was also dazzling as the city’s cooks revealed in their multicultural confidence, international experience and great fresh produce, but the bill for the food & fit out package kept creeping higher and higher.

Then I moved to Rome.  The best meals were often to be had in the smallest, most average looking places.  I worked out straight away that the places serving food in a cool ambience were usually serving terrible food; dishes that had wavered from tradition and had decidedly missed the mark.  To be fair there are places in Rome with memorable design and excellent food (like Armando al Pantheon and Romeo in Prati) but on the whole, the real Roman food experience is in pretty basic settings (like Augustarello in Testaccio and Da Enzo in Trastevere).

Many of my favourite regional Italian dishes are in themselves not great beauties.  La Pappa al Pomodoro, the Tuscan mix of bread and tomatoes is a browney, reddish mush.  It looks like baby food, hence the name, but is it is made beautiful by the homely terra-cotta bowl it most often gets served in, and the oil that drizzles into the ripe tomato soaked break.  Pasta ai Fagioli is not really a looker (being brown), but it takes on its own kind of simple honest perfection in a simple white trattoria bowl on a paper topped table.  I probably connected with the simplicity and honesty of the presentation of Roman food because it appeals to my genetic aesthetic coding, and part of my journey within Italian food has been poking around the Italian dresser so to speak; in an attempt to learn about the traditional stoneware and ceramics that characterize different parts of the boot.  I have learnt to cook in a terra-cotta pot, and to appreciate when regional food is served in its traditional plate ware, because that too speaks of the food’s identity, and because behind each artisan ceramic plate or hand blown glass there is cottage industry and a precious social fabric.

Abbacchio alla Romana, a kind of quick lamb stew, is another one of those brutti ma buoni dishes that  I fell straight in love with doing those early years in Rome where I had time to hang around the slapdash Roman trattorias of Trastevere and Testaccio.  The rosemary and garlic are the stable pals of roughly chopped shoulder or leg of lamb, which are lifted up by the addition of anchovies and vinegar at the end of the cooking process.  As the lamb is young and tender this recipe doesn’t require hours of cooking, so it’s an easy weeknight cook. 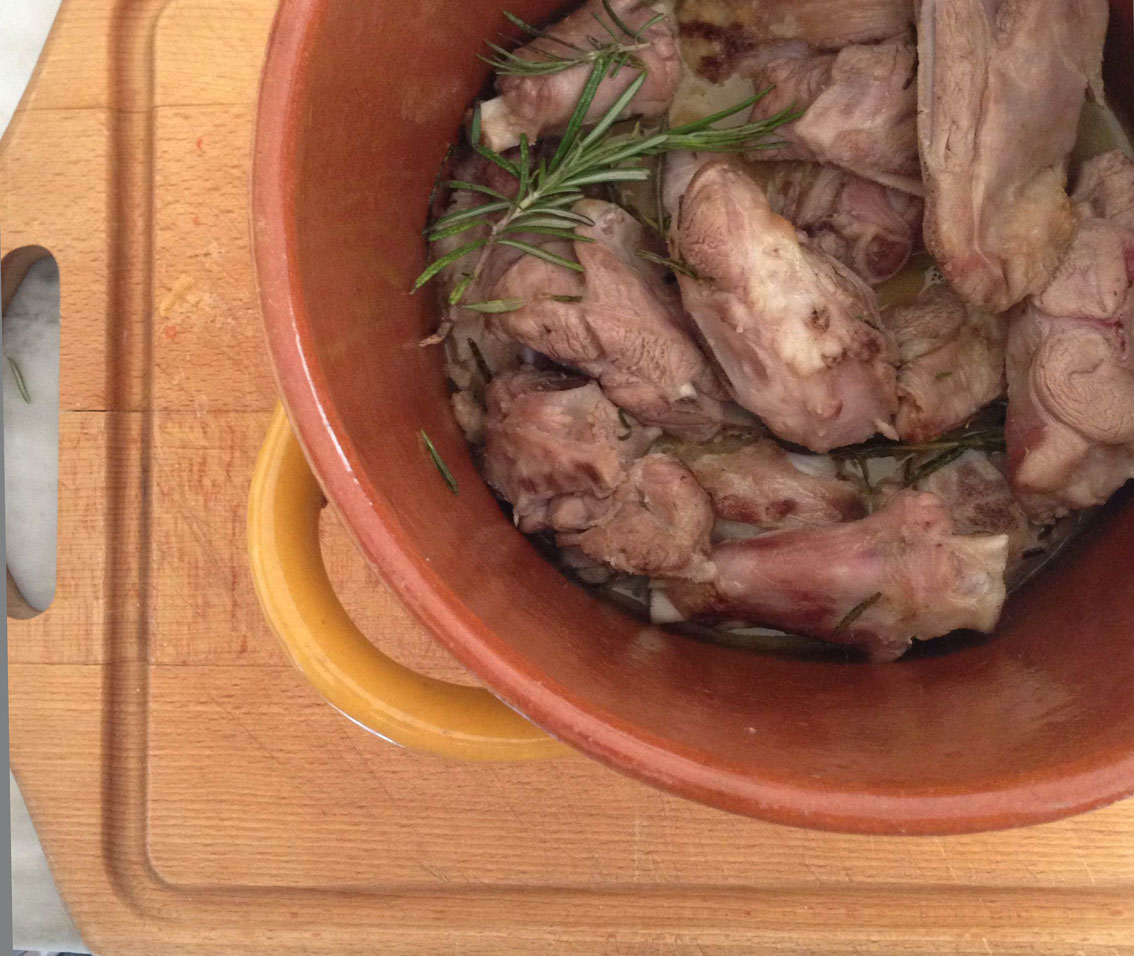 For 4, recipe from a book of meat recipes given to me by my Lubriano butcher Stefano Olimpieri

Choose a good terra-cotta or heavy based cooking pot.  Over a moderate flame add olive oil to the pot and toss in two cloves of garlic and the rosemary, stirring, squashing and letting them release their essential flavors without burning.  Add chopped lamb to the pot and let the meat color before adding the wine to de-glaze the pan.

Reduce to a low flame and cook slowly, adding more wine or water if necessary.  The meat should cook, deepening on the size of the pieces, in about 30-40 minutes. Five minutes before the end of the cooking process use a mortar and pestle to squash a clove of garlic, two chopped anchovy fillets and the red wine vinegar.  Add to the lamb, season with salt and pepper accordingly and serve with a good strong bread, patate al forno and in season greens. 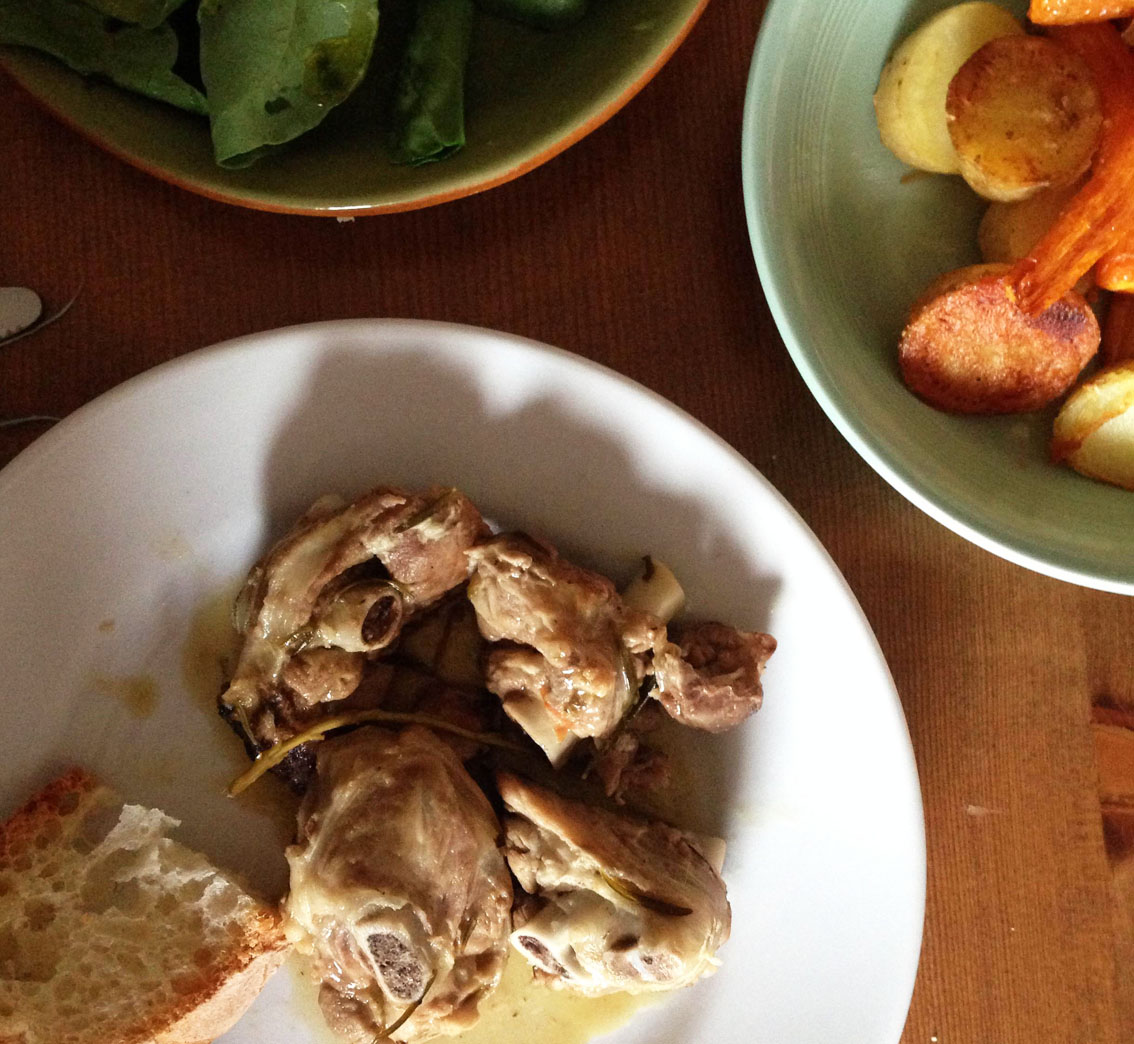 places to eat in Rome (an updated list)
2 replies