In Italy fair trade products; most often coffee, sugars and chocolate, are marked by the words Equo e Solidale.  Equo meaning equal and fair, with solidale translating as solidarity; together with, in union.  Solidarity is a word that gets used a lot in these trying times, and I think (many) Europeans seem to have an inbuilt understanding of the idea, one that has run through their veins ever since the earliest labour movements in the 18oo’s.

As opposed to charity; caritas and beneficienza, solidarity implies doing things together instead of one simply giving to another.  Because often the best way to help someone, near or far, is to buy something from them.

In the aftermath of the earthquake last august, which had its epicentre in the central Italian town of Amatrice, there was much squabbling on social media about worthiness of donations made via a plate of the eponymous Spaghetti Amatriciana in restaurants around Italy and beyond.  Along with many other bloggers and food writers I belong in the camp of ‘every little bit helps’ also because awareness is so important, especially when the quakes centering on North Eastern Lazio, Umbria, Abruzzo and Le Marche keep on coming.  Nonetheless, it is true that we often don’t really know where our money goes as a blanket donation, which is where buying a slab of cured pork comes in.

The sauce for the famous pasta all’amatriciana has only four ingredients: a couple of slices of guanciale; cured pork cheek, tomatoes; fresh or canned, a good grating of pecorino and a small dried chili.  You understand how it came to be when you think of Amatrice itself; a town of some 2,600 inhabitants to the North-East of Rome, with sub alpine terrain where pigs are raised and cured and the only cheese is sheep’s milk pecorino.  The purist will tell you that a bowl of spaghetti all’amatriciana should be made with guanciale di amatrice IGP, the advantage of the guanciale over pancetta being the quality of the fat, and the flavour that fat duly passes on to the sauce.  It is fair to say that if restaurants want to call it l’amatriciana then the right stuff should be in there.

Of course when shepherds made it way back in the day, it didn’t have tomatoes, still to arrive from the America’s, but today that dish goes by another name; la gricia; the cured pork lover’s dream.  Another note in the lore surrounding l’amatriciana is that while those from Amatrice talk about using spaghetti Romans swear by either the fat and very messy bucatini or thick tubes of rigatoni. 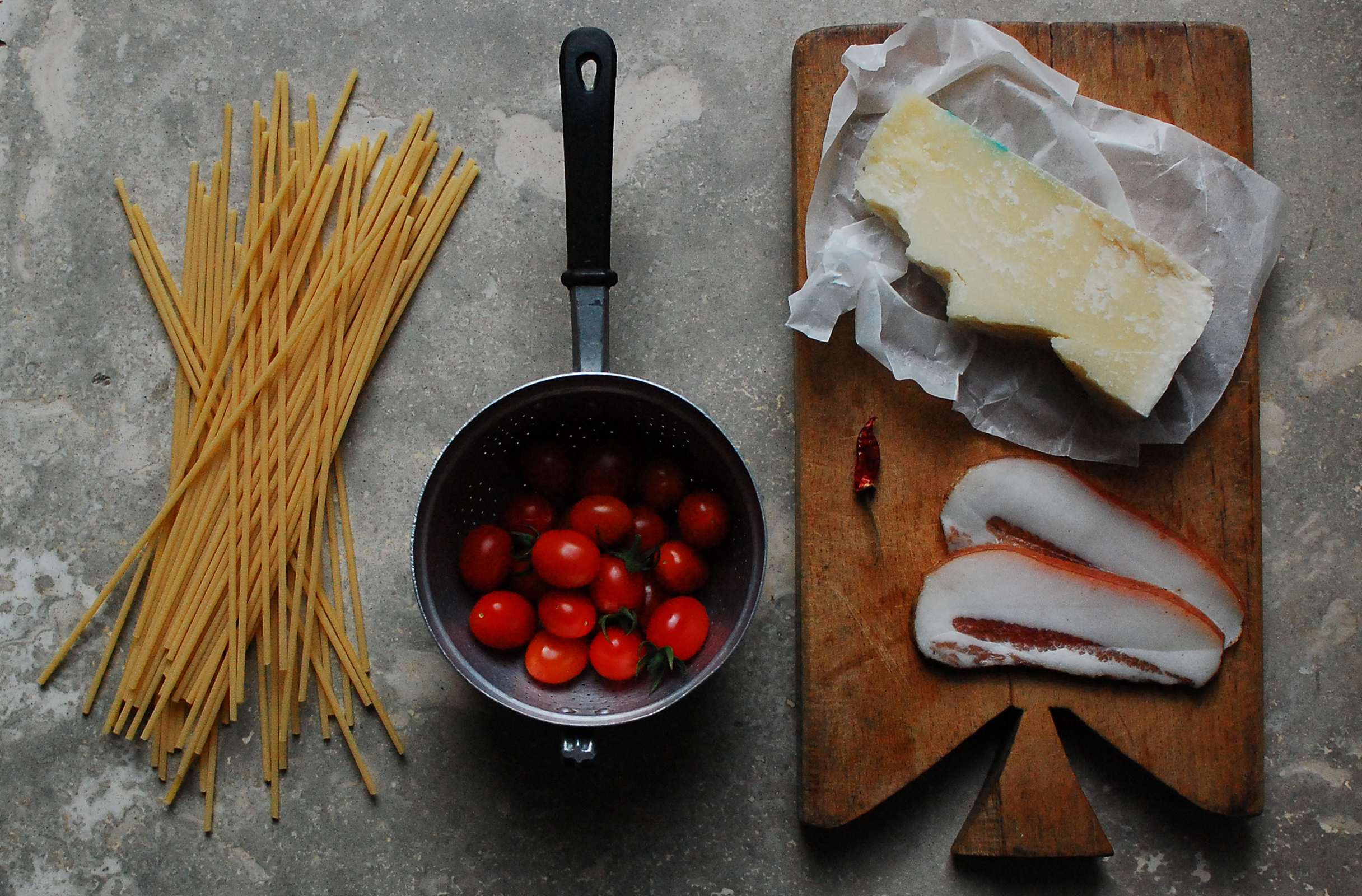 So, buying more from these largely agriculture dependent areas, directly where possible, is a concrete action, and at the farmers markets around Rome prodotti solidale – wheels of cheese, salamis and cured meats – are to be found and favoured.  The area around Norcia in Umbria, that was also damaged in the recent earthquakes, as it has been many times before, is perhaps the most important centre of pig rearing and pork curing in central Italy, hence the name Norcineria or cured meat shop.  Some of the loveliest people I have met on my gastronomic strolls around Rome for Casa Mia are from Norcia and we always spend a bit of time talking about how the gutsy mountain pigs from Umbria and Toscana make prosciutto that is stronger and more full flavoured than the dulcet tones of prosciutto di Parma or San Daniele which are categorised as sweet in comparison.  I love the more rugged flavour of Prosciutto di Norcia – even more so now.  You can click here for a list of producers from the Norcia area.  And here for more about some of the producers around Amatrice.  Domenica Marchetti also has a list of ways to help with reconstruction in the earthquake areas here. 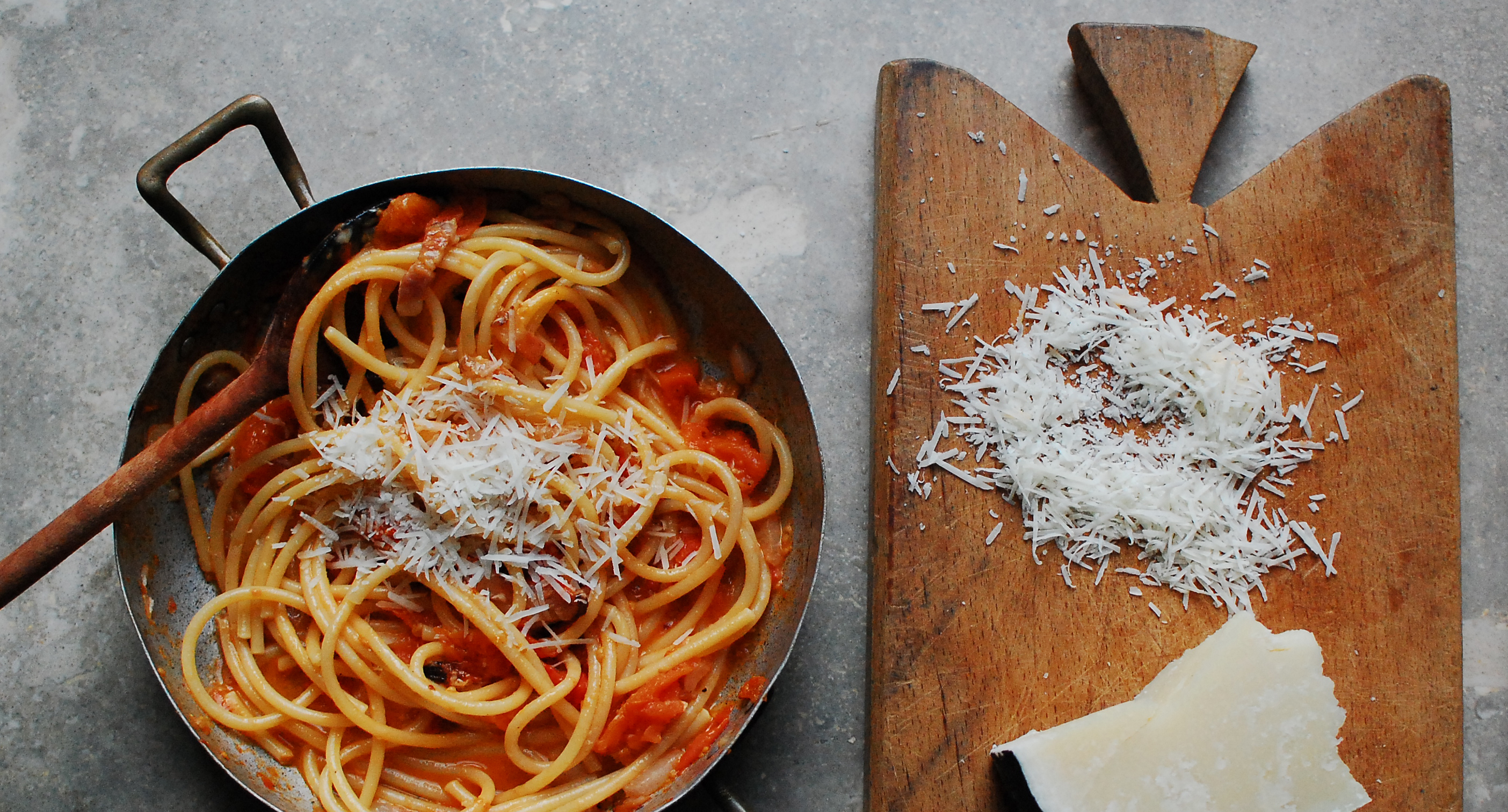 In the years I have been writing here, I have never written about the Amatriciana, perhaps my best-loved of the very Roman primi piatti.  As a prelude to the recipe I’m inserting a piece I wrote back in 2007, long before this blog came to be.

I have come to the fabric merchants around the ghetto looking for muslin, which in the end is found in a labyrinth of a store in the bottom of a grand old palazzo. The gentlemen that run the store, or more series of rooms, are delightful, and in our struggle to translate muslin into Italian we have a long discussion about – inevitably – food, which eventually winds around to l’amatriciana.

Everyone in Rome talks about the Amatriciana, because it’s one of their dishes, but also because like most recipes, there is a bit of debate about what exactly goes in it. The fabric merchants happen to be from Amatrice, the town to the North East of Rome that is the birthplace of this much-loved piatto romano, which is so old that it was originally made in bianco because the tomatoes had yet to arrive from the Americas. Some recipes still omit the tomatoes but this is really another dish la Gricia and others use garlic, which is very controversial. The first time I made l’amatriciana for Leonardo I was being monitored and when I admitted I had tossed a clove of garlic in he threw his arms in the air ‘ma no, ma no! noi non mettiamo l’aglio!’ ‘But no, no! We don’t put garlic in the Amatriciana!’

It is the inclusion of onion, that is the real point of contention. Many say no, others say yes. The gentlemen from Amatrice say yes, but the traditional recipe says no. Leonardo gets agitated at the suggestion that there may be two schools of thought, the Roman way is the only way. The meat is not pancetta but guanciale, but a good piece of pancetta is also ok. The cheese strictly Pecorino rather than Parmigiano. I like it without garlic and onion.

Wash and chop the tomatoes roughly.  Fill a large saucepan with  approximately 4 litres of water.  Trim the rind from the guanciale and cut into cubes or batons.

If you are using guanciale, which is much fattier than pancetta, there is no need for oil.  Add broken chili and batons of guanciale and fry lightly for a couple of minutes, add a tablespoon or so of olive oil if you are using leaner pancetta.  Pour in the chopped tomatoes and a pinch of salt and stir well, rubbing the tomatoes into the oil with a wooden spoon so that you see the tomatoes take on a lovely burnished color.  As needed add tablespoons of water from the pasta cooking pot to keep the sauce liquid, and keep stirring, tossing and gently bashing the tomatoes so that they break down.

Add a tablespoon of salt to the pasta water as it comes to the boil.  Cook the pasta al dente, drain and toss back into the sauce which should still be on a low flame.  Mix well and add a handful of grated Pecorino.  Always reserve a cup or so of the pasta cooking water and add a little if the sauce needs extra liquid, it should be runny enough to generously  coat the pasta.  The rest of the cheese can be added at the table. 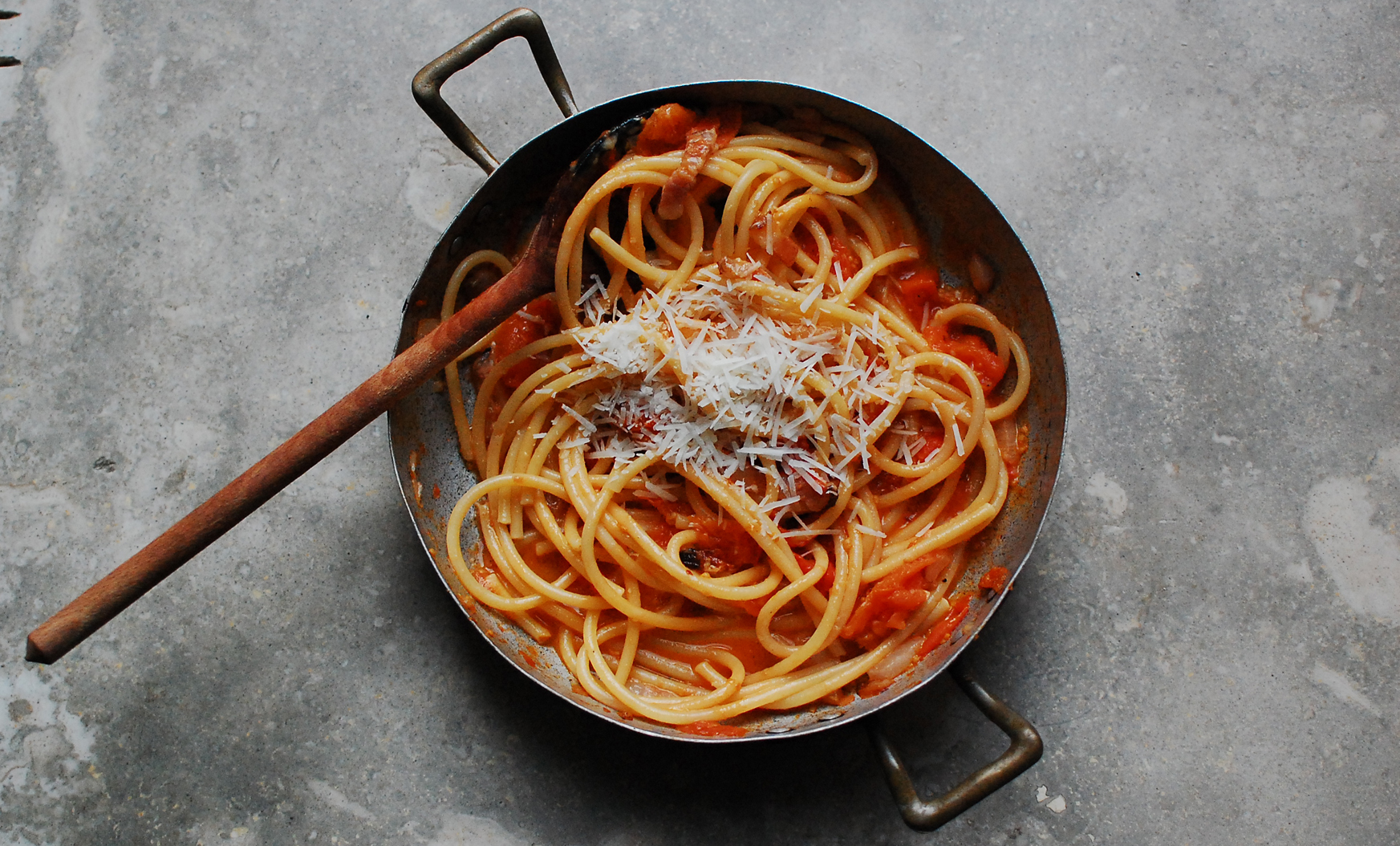