Another of mum’s cakes from the original recipe folder, that Emma and I are delighting in as we leaf through looking for things to cook during this second lockdown.  Mum didn’t bake this cake often, perhaps because my father isn’t big on spiced things, but I will make it more often now that it has been rediscovered.  Super simple to make, it’s light and moist and fragrant, slightly crispy around the edges and perfect sprinkled with icing sugar and cinnamon together. I bought a lovely big tub of 25% fat sour cream from the shop on the piazza selling ‘Prodotti dal’ Est’, its windows crammed with Babushka dolls, and shelves lined with Eastern European specialties.  I often wonder how a little shop like this can survive (this one moved last year from its original shop where it had been at least 15 years) but the owners told us recently that their main business is selling to the kitchens of the big embassies, of which we have several close by, notably the Russian Ambassador’s residence in the sprawling Villa Abamalek at the top Via delle Fornaci on the side of the Gianicolo hill.

I baked in a 25 cm ring tin, quantities are in both cups and grams as per mum’s original typed (on the ancient Mac) version

Beat the eggs (in a stand mixer or using electric beaters) until starting to fluff and then add sugar gradually, continuing to beat until the mixture is thick and pale in colour. Sift the flour, raising agents, salt and spices and gently fold into the batter alternately with the sour cream and vanilla.

Bake until firm to the touch – about 25-30 mins for a ring tin – and a skewer comes out clean.  Mum was quick to remind me the other day on the telephone that this cake does not need icing – indeed no cake needs icing in her book – but it perfect finished with a dusting of cinnamon and icing sugar together. 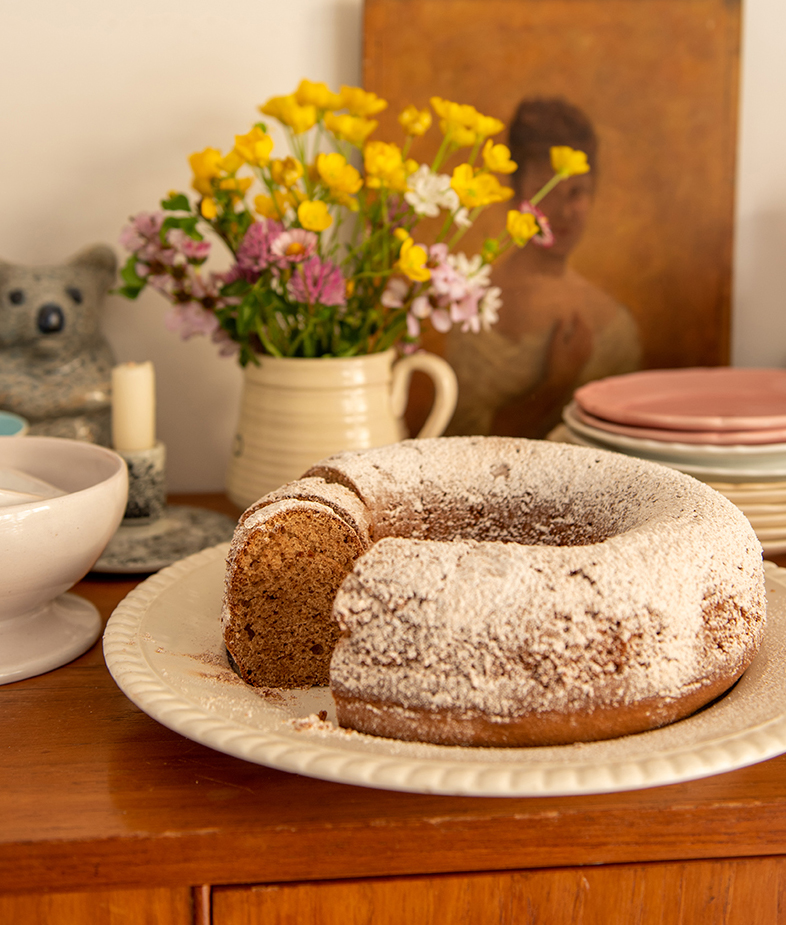