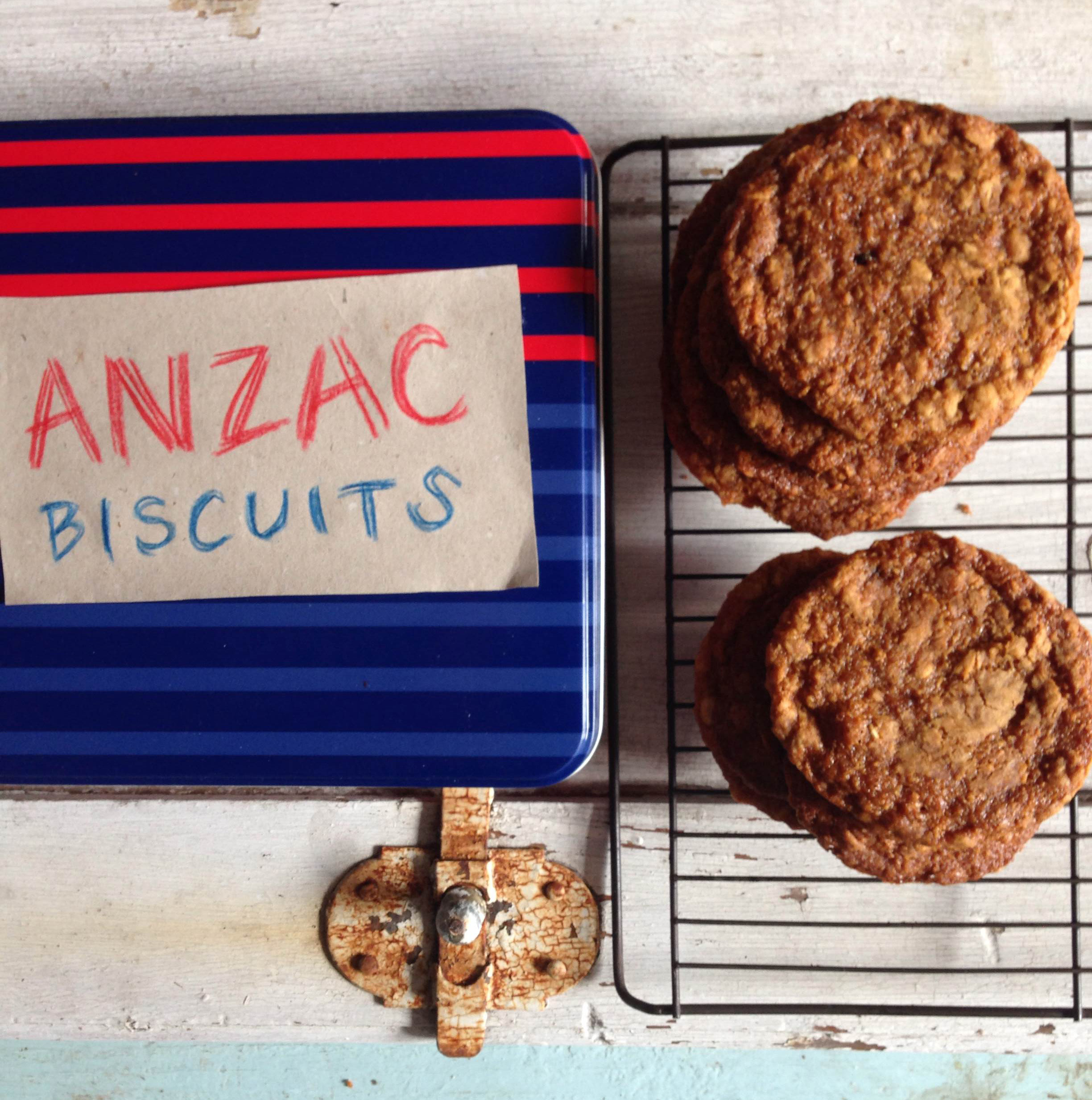 A couple of days ago a gentleman asked me whether I was British.  I replied ‘No, I am Australian’.  He suggested that this was the same; making me essentially British.  I repeated that I was Australian, and that did not make me British.

2015 marked the centenary of the landing at Gallipoli, the start of the bloody campaign where the ANZACS; the Australian and New Zealand Armed Corps, tried in vain to capture the Dardanelles.  I’m telling the story as a prelude to my recipe for Anzac biscuits because it is story to remember, to pass on, not only because it was part of the forging of the identities of two young nations and their distinct national characters, but because it was a moment in history that we need to remember in order to learn from (even though we don’t seem to have). In the 1st World War Australia lost more men per capita than many of the other nations involved, and the emotional toll on the nation at the time is almost hard to imagine 100 years later.  Driving into country towns in Victoria’s Western District, along the endless Avenues of Honour with a tree planted for every young soldier killed takes you close.  But while Australia lost so many men on the beaches at Gallipoli, not far away one million Armenians were killed in an act of genocide that has been brushed under the carpet and ignored by many for decades.  All of it highlights the utter folly of war in all of its forms.

Anzac Biscuits are part legend part fact, like the Anzac Spirit which some call the Anzac Myth.  I think it is a pretty special story because it is not the usual tale of courage, mate ship and bravery of the Anzac legend, but a story of love.  During WW1 mothers, sisters, wives and girlfriends of the troops were worried about how well their boys were being fed and what they could send to give them more energy.  These biscuits; rich with oat flakes and coconut and bound together with golden syrup, were deemed the best seaworthy products they could make to pack in airtight tins and send to their lads.  A  bit of internet sleuthing reveals that the troops in 1915 at Gallipoli ate only the rock hard army ration biscuits called ‘tooth breakers’, but that Women’s Associations did bake and send them to the men on the Western Front where the campaign lasted much longer.  They were also baked and sold in fundraising fetes and parades around Australia and New Zealand for the war effort.  There are interesting historical bylines, like the absence of eggs, that were not available because so many egg farmers were at the front.  The idea of women baking for their darlings, so many of whom they would never see again, is a poignant picture of women’s love.

Perhaps the most moving words I have read about the disastrous Gallipoli campaign are those of Atatürk, at the time military commander of the 19th Division and future leader of the new Turkish nation.  His words, written in a memorial in 1934, speak of the universality of loss.

“Those heroes that shed their blood and lost their lives … You are now lying in the soil of a friendly country. Therefore rest in peace. There is no difference between the Johnnies and the Mehmets to us where they lie side by side here in this country of ours … You, the mothers who sent their sons from faraway countries, wipe away your tears; your sons are now lying in our bosom and are in peace. After having lost their lives on this land they have become our sons as well.”

These words, however, totally romanticize the Turkey – Anzac conflict, and have for over a century cancelled the discussion (in Australia at least) of the other things that were happening at the very same time, namely the Armenian Genocide, under the watch of the same Attaturk.  This film, by Dzovig Torikian documents testimony to the 20th century crime against humanity still waiting for worldwide acknowledgement.

In this recipe I melt the sugar in with the golden syrup and butter for ‘toffee-ier’ biscuits, but take care not to overcook this mixture.  Some recipes leave the sugar with the other dry ingredients to then mix all together with the syrup mix.  Some like a softer Anzac, others a crispy brittle biscuit, and others prefer a chewy result.  These should come out on the crispy side leaning into chewy after a day or so.

Mix oats, flour and coconut and a pinch of salt in a large mixing bowl.

Use a heavy based saucepan over a medium flame to melt butter, sugar, and golden syrup, mixing well.  Add two tablespoons of water and a teaspoon of bicarb soda.  Let the mixture froth up a little, stir well and take off the heat.

Add the liquid to the dry ingredients and mix thoroughly until you have a good sticky dough.  If the mixture seems too wet add a little flour.  Let the dough cool a little and preheat oven to 160 °C. Using a dessert spoon shape balls of dough about 4 cm in diameter and place at least 7cm apart on a tray lined with baking paper.   Do not flatten biscuits as they will flatten in the oven.  Bake for 10-15 minutes until golden brown, opening oven the halfway mark to squash the centre of each biscuit with the back of a fork.

Notes:  Some people like to add sultanas, and they are a great addition while not part of the traditional Anzac recipe.  The crispy chewiness ratio can be also modified by playing around with baking temperature, try raising by 10/20 degrees for crispier Anzacs. 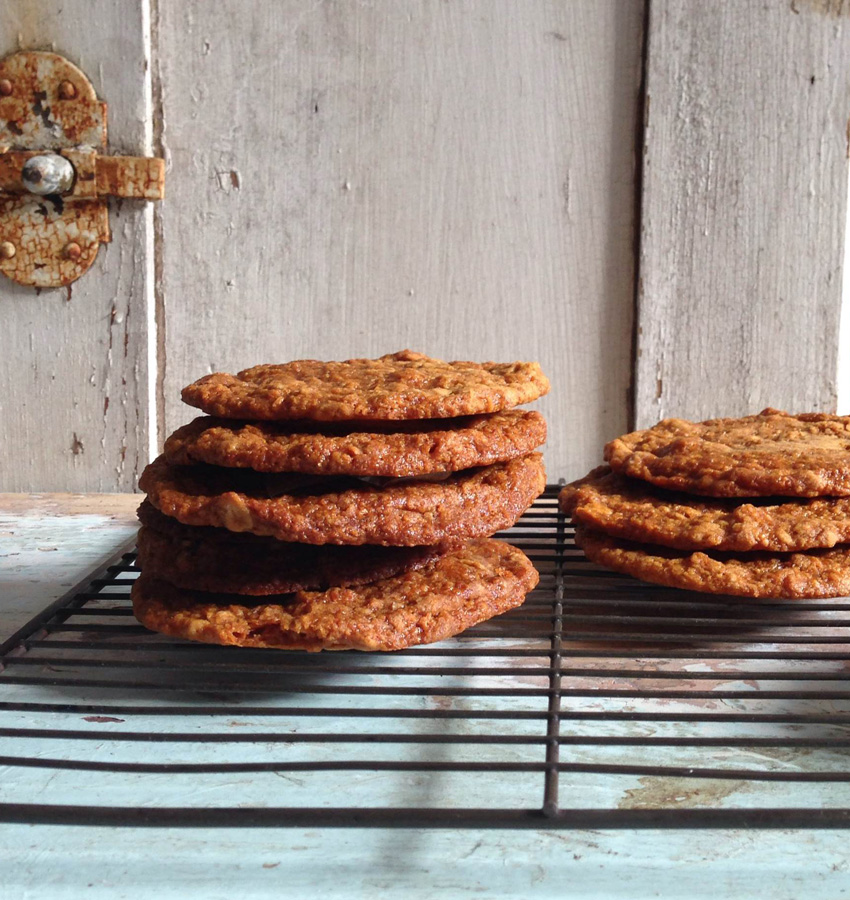