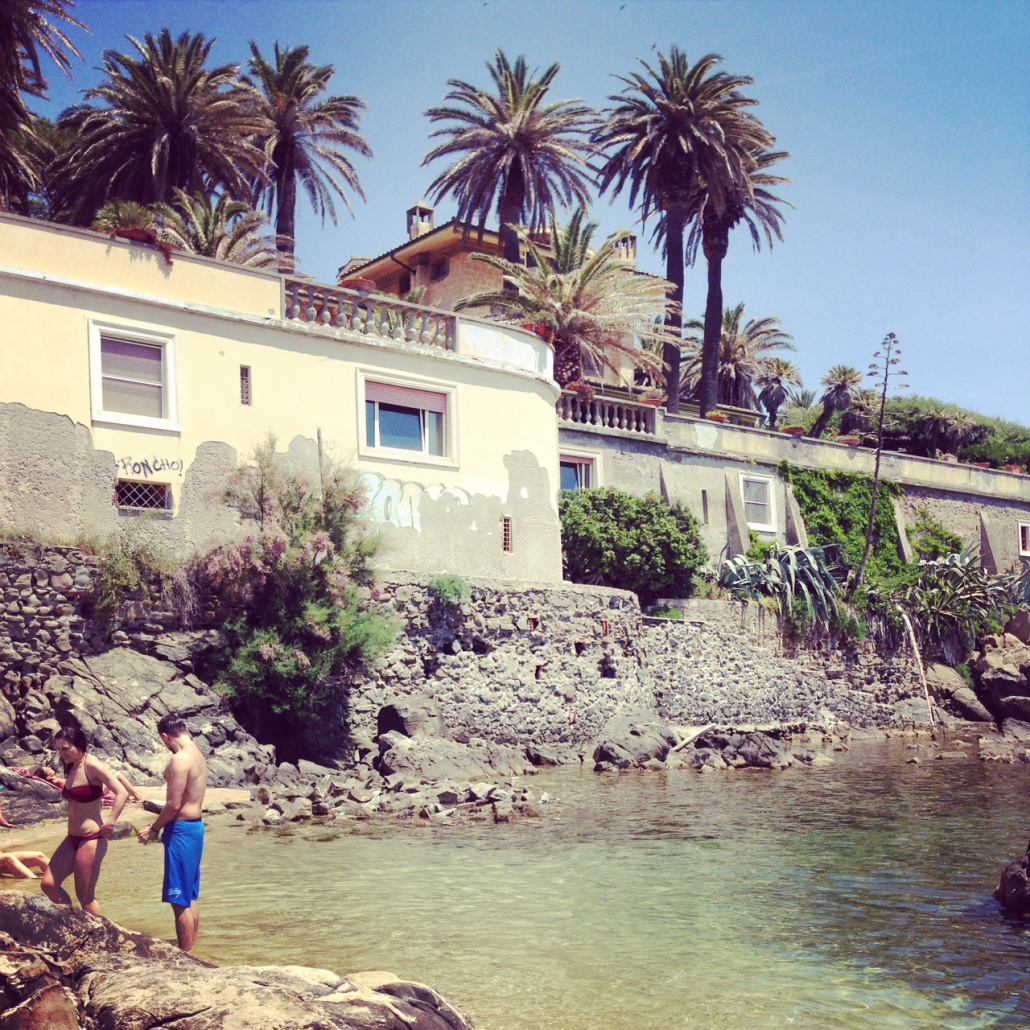 If a football stadium is a kind of open air temple to human passion; a place where barriers come down and for 90 minutes everyman is united, then beaches too are arenas to the egalitarian gods of sun and sea.  I am Australian, and for me the beach is the bracing chill of the breaking water, the throwing of the reinvigorated body down on a towel and the squeak of sand between the toes. As such I don’t think I’ll ever be fully comfortable with the rows of umbrellas and loungers on Italian beaches, the idea that people pay to go to the beach, only to remain curiously removed from the physical joy of sand and salt, and the undemocratic-ness of it all, the bleak division between the loungers and the (often inferiorly positioned) free beach. The spiaggia libera, is where I feel most at home, and it is with a mix of fascination and disdain that I view the whole beach establishment tradition. 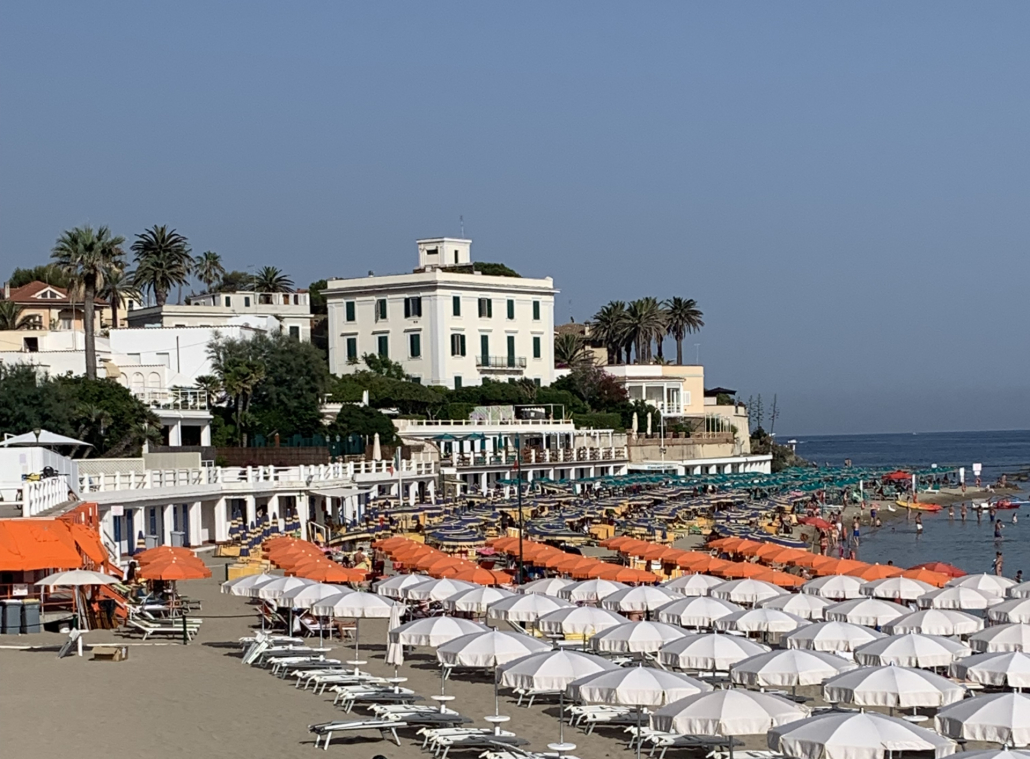 That said, a day stretched out on a lettino with a good book isn’t bad once in a while, and there is a certain charm to the gaily coloured umbrellas flapping in the sea breeze, little bars doling out iced treats and Campari sodas while decidedly un-Bondi like lifeguards watch the bathers (and their telephones).

When the kids were younger, we would often fill a free summer day with a trip to Santa Marinella; one of my favourite Lazio beaches, its early 20th century beachfront pavilions and changing rooms reminiscent of my beloved St Kilda.  We would go to the small hanky sized patch of free beach right at the southern tip of the long strip of colored umbrellas on the main beach and, having found a square metre of sand, towels would go down, buckets would come out, sandy panini would be consumed and everyone had a fine time until the train ride home.  Occasionally I would splash out on an umbrella for the shade, and so we could have a shower before the trip back.

There are lots of beach options in Lazio (whose Tyrrhenian coast stretches from Montalto di Castro in the north to Minturno in the south), very few with the allure of Sardinia or Liguria or la costa Amalfitana, but close enough to Rome to fit the bill when temperatures rise.  The prettiest towns and best beaches tend to be south (Terracina, Sperlonga, Gaeta) but journey times are longer and the Pontina road that heads south out of Rome comes with severe warnings (potholes and masses of bad drivers).  Santa Marinella is far north enough to leave the Roman hoards behind, has golden sand and pebble beaches (read clear water) and the 36 minute train trip makes it a super easy day trip or mini escape from the capital in summer – and a low carbon footprint one at that. 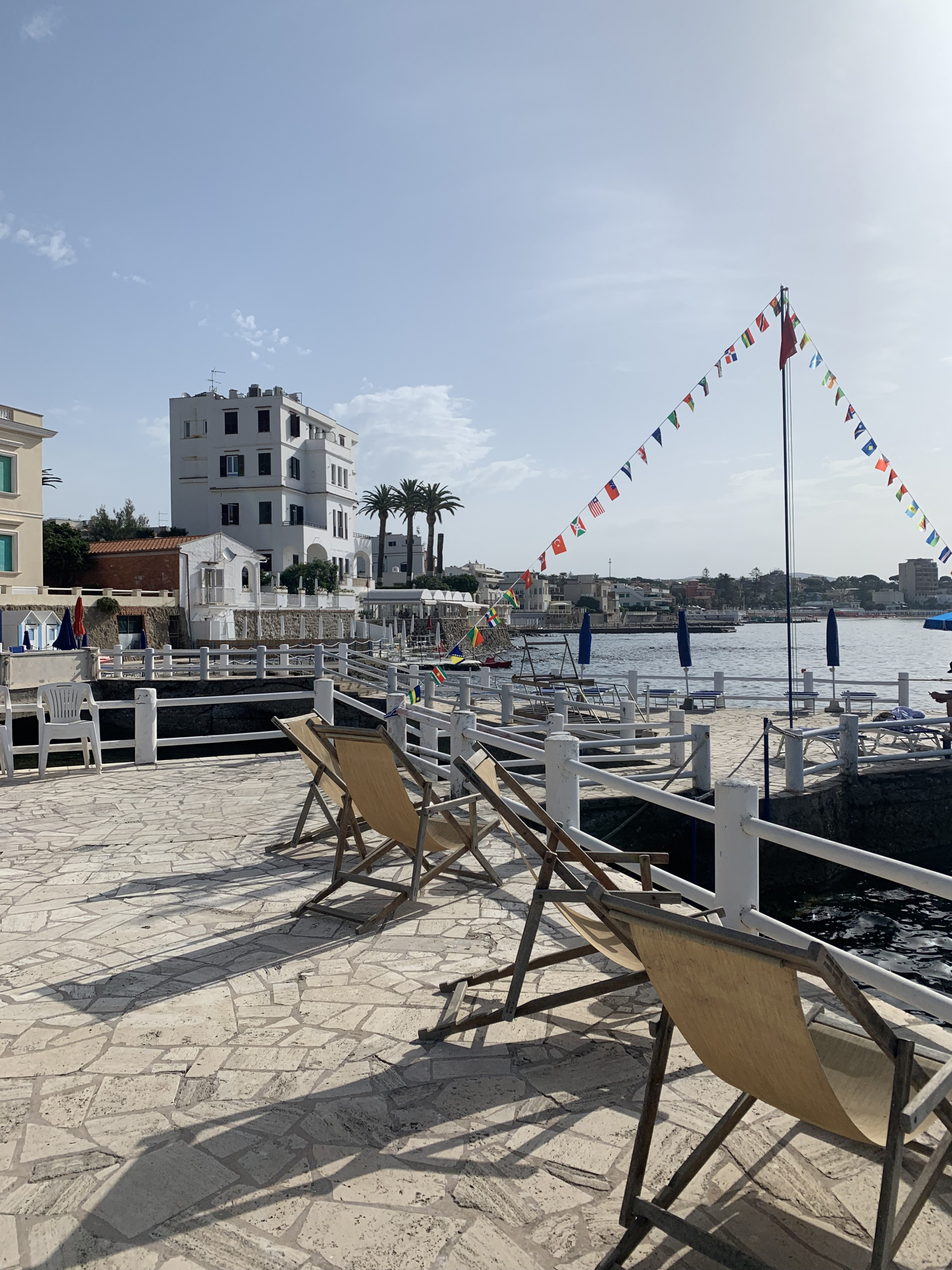 Since those early summer day trips there have been rented beach flats with acquamarine tiles and a pebble beach across the road, kids jumping off piers and chilling watermelon in the sea.  We have discovered the pretty piazzas and aperitivo spots in the old centre, walked a hundred times from the train station, eaten mussels and more mussels, peered through fences dreamed at the for sale signs hanging on old villas.   Just this June I bought a second hand bike so I could pedal to the fruit stand and explore the neighborhoods north of the station, the eclectic mix of early 20th century apartments, villas, eighties condos, beach establishments built on concrete slabs jutting out into the sea reminiscent of the Bondi Icebergs, and curious beach boxes built on trabocco stilts. On my last day I rode to a restaurant up near Villa Saracena as part of my research into where to eat the best Spaghetti alle Vongole (ongoing).

This is my updated guide to Santa Marinella.

To reach Santa Marinella: take the Civitavecchia (or Pisa, Livorno) line from Termini, Ostiense, Trastevere or San Pietro stations. The trip takes roughly 40 minutes and the main promenade beach is just 200 meters from the station.

Beaches:  Unfortunately the free sand beach at the south end of the main beach is still the size of a handkerchief but there are also stretches of free pebbled beach going south towards Santa Severa.

There is also a free beach just north of the main sandy beach, bring water shoes if you can! The local council have invested in this beach in 2022 covering large parts with sand, rebuilding a concrete deck with spots for umbrellas, and providing free loungers on a first in best dressed basis. 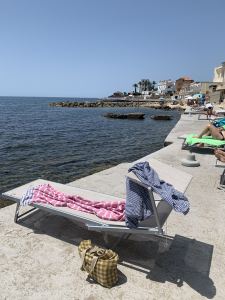 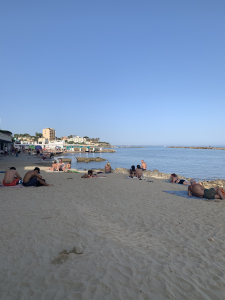 Angeletto is a famous stabilemento about 2.5 km north of the main beach, and the deck like structure with bathing pools is (see photos below) in front of Hotel le Najadi. 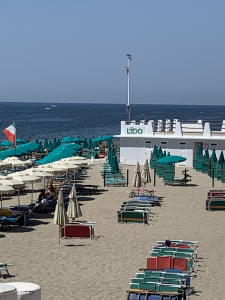 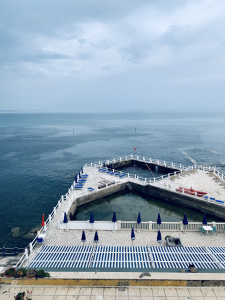 Staying the night :  I loved the old school simplicity and sea views from Le Najadi (photos below). The rooms are super spacious (but breakfast is very basic) and  there is a cool deck like beach establishment down below (note that umbrellas not included in room rate).

Friends recently stayed at La Baia di Luna holiday apartments across from the main beach.  It is modern, clean and practical and super close to the station and beach.

Another sweet hotel, in the pretty piazza near the Castello Odescalchi is Hotel L’Isola which I hear good things about, but have yet to stay at. 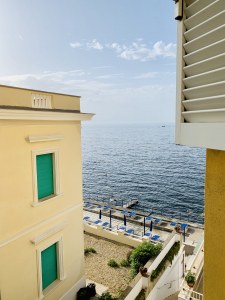 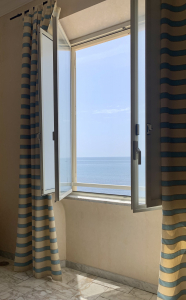 Eating out:  Osteria del Mare is in the lively piazza around Viale Roma along with aperitivo spots and other restaurants. Fantastic flavors and the freshest seafood, we had a great meal here and I will be back for their Sauté di Cozze.
Il Trabucco is amazing for the location (photos below, over the water about 2 km north of centre) and the menu is a thoughtful mix of seaside classics and interesting combinations on the menu. Worth the walk from the centre.
Molo 21 is on the deck under Hotel Le Najadi. Sea view, interesting menu (especially the antipasti) and cool wine list.

We also like La Tavola Azzurra on the via Aurelia in the southern part of Santa Marinella, and the fun Pizzeria Il Giardinetto da Igoretto which is always packed. 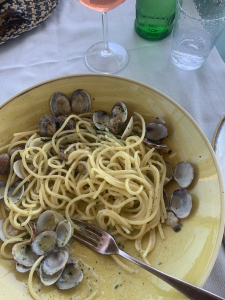 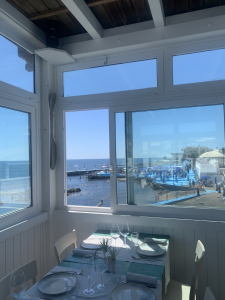 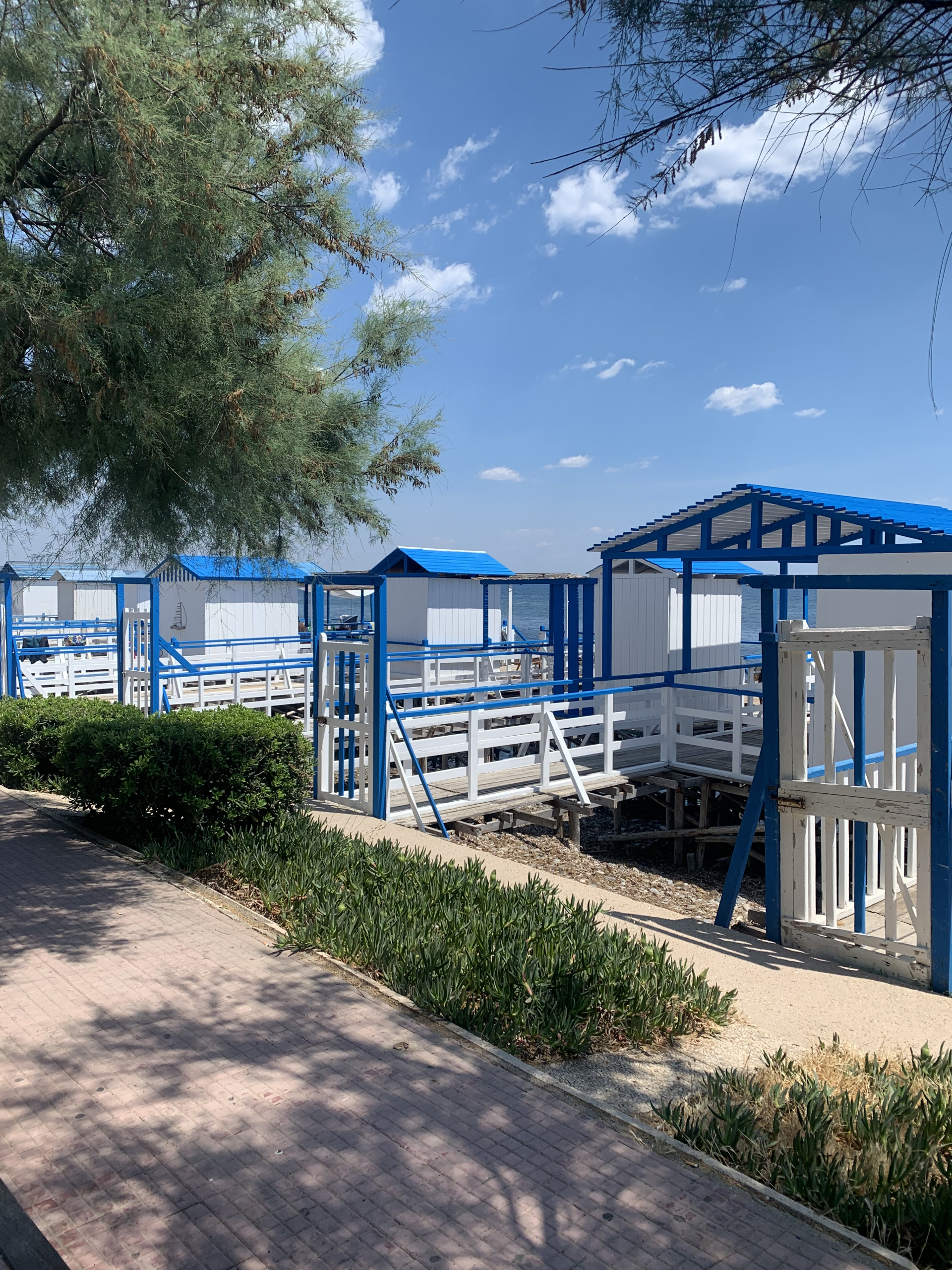 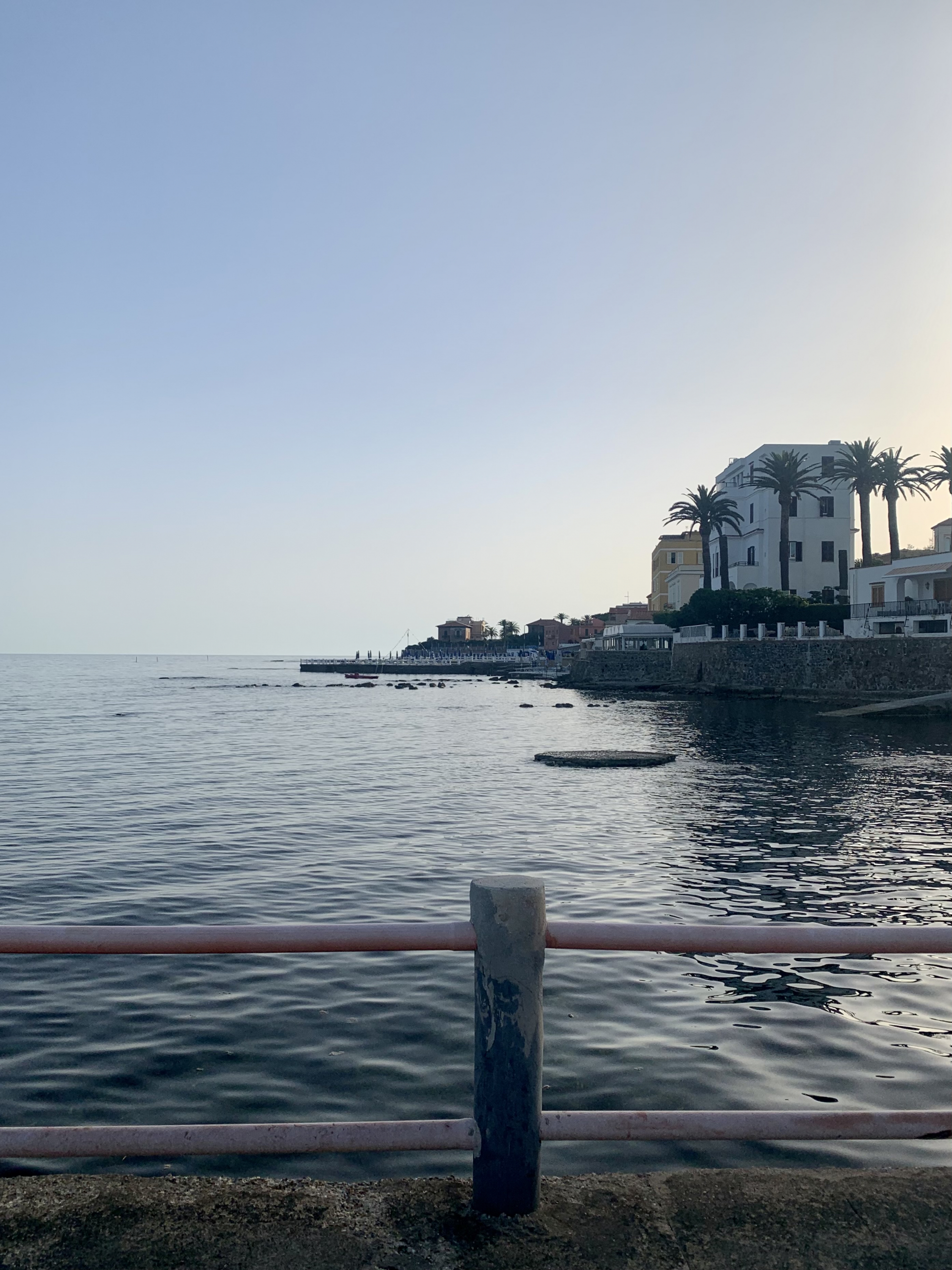 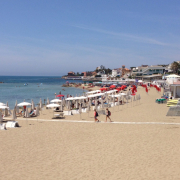 trains and sandy feet: santa marinella & and a pot of mussels 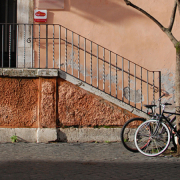 when in Rome: tips for travelers
0 replies