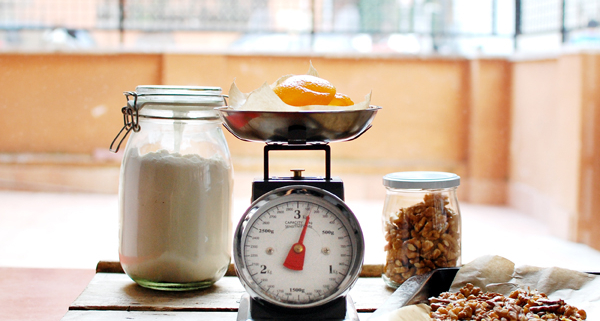 Much as I don’t want to to admit it, my mum Alison is getting older.  She is in fabulous shape for an 82 year old, but going down a gear as each year passes.  The proof is in her kitchen, and in the gradual slowing of festive production. I am not sure whether this year she has even made a tin of shortbread, or her beloved American Christmas log with pecans and brazil nuts.

In her heyday she always started early on her Christmas baking; plum puddings and rich fruit cakes might be made from about July onwards, so bags of candied orange peel, used also in her Genova cake and other regulars, were generally found in her pantry year round.  As a teenager (the period when dried fruit lovers come of age) I knew just which old tin to open, digging my hand in around amongst fat raisins and sultanas to find the citrusy cubes of orange peel.

In Italy fruit and nut vendors sell lovely canditi in large whole pieces, not just oranges but also bright green cedri  (citron), ready to be cut and added to festive treats.   Sadly, the general population seems to have lost the palate for candied peel, given the number of commercially produced Panetone sold senza canditi.  I love candied peel so much that one year I tried making my own in an aspirational bid to be more waste not want not, conserving thick substantial and untreated orange rinds from the breakfast juicing, carefully peeling out the inner pith and cutting off some of the rind, then following the somewhat laborious ritual of boiling and reboiling the rind in water to release the bitterness before cooking them in sugar syrup.  Laborious was indeed the take home word, and I went back to buying candied citrus.  When not hidden properly I have found Alberto digging around in the canditi jar.

Back when this blog was very new, and on a random search for new regional Italian festive treats, a blog called Non Solo Piccante suggested a recipe for these very rustic, deliciously chewy (but prone to be rock like if you forget them in the oven), little biscuits called Cavallucci di Siena. Spicy, packed with candied orange and walnuts, they have become a Christmas time cookie jar staple, excellent with wine during after dinner board games with the pre-teens.

Note that, seven years into the Cavallucci affair,  I have persisted in making them without the aniseed seeds, afraid they will interrupt the heady spice notes, which may indeed mean that they are no longer fit to be called Cavallucci.  If you do feel like the going through the very worthwhile rigmarole of the home candied peel I think my friend Rachel’s description of how to do it is very good.

In a large bowl combine the flour, pinch of salt, baking powder, spices, chopped walnuts, a grating of untreated orange peel and the diced candied orange.

Make a light sugar syrup by dissolving the sugar in water and cooking for a couple of minutes.  Keep the liquid clear, don’t let it caramelize.  Let the sugar syrup cool a little and add the honey and stir well.

Make a well in the middle of the dry ingredients and pour in syrup, mixing constantly so that the mixture amalgamates well.  The mixture should have a consistency similar to shortcrust pastry, perhaps a little softer.  If it feels too gooey add a little more flour by the spoonful.  Turn the mixture out onto a floured surface and knead it a little till it come together in a compact block, form into sausage like rolls, then cover in baking paper and refrigerate for at least half an hour.

Chop the into pieces roughly 3 x 3 cm. Roll into rough balls and lay on a being sheet lined with baking paper. Flour a thumb and press down into the biscuits to give them their signature indent.

Bake in a 160°C oven for 15-20 minutes.  They will not brown much, and don’t overcook in the hope that they will.  They can be dusted with a little icing sugar to serve.

ten years: and a recipe for broccoli pasta